While others are threatened, I feel excited about this upcoming controversial movie, "Da Vinci Code," starring Tom Hanks, based on Dan Brown's novel. There will be increasing opportunities to discuss about the Lord Jesus and His truths with this.

The book and the movie is a work of imagination. It's fiction. So, I wonder why all these fuss and noise in the media all around the world? Well, if you know showbiz, you'll know why.

Anyway, for the sake of healthy discussion, let me attempt to make some comments. One of Dan Brown's theses that elicited the most controversy is this: Mary Magdalene was Jesus' wife and the mother of his children. Is that true?

If you go by the Bible, Dan Brown's thesis is false. What does that say then about the movie? However, the false, especially if it's entertaining, is the one that makes money.

It has long been believed that Jesus was single. Every detail of Scripture indicates this. When he was in ministry, there is no mention of a wife. Whenever Jesus' family is referred to, it is his brothers and sisters who are mentioned. But never a wife. Nor is there any indication that he was widowed.

Thus, Brown's attempts to suggest that Mary Magdalene was, in fact, his wife is empty speculation. The apostles, like Peter, and the brothers of the Lord, all of whom, are said to have had wives (1 Corinthians 9:5). This passage shows that the church was not embarrassed to reveal that its leaders were married-or to suggest that they had the right to be.

The same would have been true of Jesus, if he had been married.

The example of the call to be 'eunuchs for the kingdom' appears, in part, to be rooted in Jesus' own commitment and example not to be married (Matthew 19:10-12). In fact, the rationale for the Roman church's later view that priests should not be married partially stems from the view that Jesus was not married.

So if we ask what the hard evidence is that Jesus was married, there really is a very short answer. There is none.

Jesus' marital status was one dimension of his dedication to His call to save mankind. I'm thinking, as Jesus faced much suffering and crucifixion, it was of benefit that he did not have a wife or children. These were likely some of the concerns the apostle Paul alluded to in speaking of "worry for earthly things" in his epistle.

In the Philippines, fiction sells a lot. Filipinos are by nature lovers of fantasy. Dan Brown's "Da Vinci Code" movie promises to be one of those imaginative box office events in the Philippines (and all over the world) of all time. 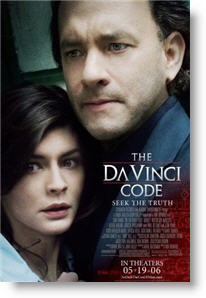 mika lucenario said…
I'm very glad that someone such as you, Sir, are very much open about this. It is, I believe, how the Church should be in these kinds of Hollywood issues -- open with opinions, fictions and of the kind.

Perhaps, if you have heard of the 'gnostics', there might be arguments of the 'other' side that you have not heard or known of. Gnostics and their discriminated documentations...for they are discriminated, they were destroyed, and because of this, we never know now if they're true or not. Seems really controversial for a patriarchal religion. :)
Monday, 15 May, 2006