I met two energetic, Spirit-filled women missionaries over lunch in Antipolo today. One is an American; the other is a Filipino. 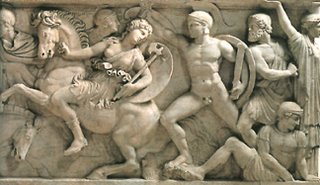 The American woman missionary has been serving in the Philippines for over 30 years now. When she first came to the Philippines, she was just a newly married 21 years old. Much of her mission work along with her husband were done among the tribes. Now, with the passing of her husband late last year, she now oversees different ministries -- churches, bible schools, pre schools, publishing and writing -- while serving in various places of the Philippines and Asia.

The Filipino missionary was also a woman. She's a native Ifugao, now pastoring in Antipolo City. According to her, she does not receive any salary or money from the church where she serves or from any work she's doing in her own country. She's been into America several times, preaching in front of murderers in the jails.

Both of these women are "one of a kind." I seldom see women like them. When I think of their example, I feel humbled. They represent the very essence of the Gospel and service in His kingdom.
Email Post