The Bible and Homosexuality

Yesterday, my wife and her friend Nitz went out together. A conversation transpired between them about a man who left his wife and five children to be with another man. Some mention was also made about homosexual behavior in the church (even among pastors!). While my wife was sharing about it to me this morning, we joked with each other and I seemed to enjoy it. But later, I realized we were making fun of something that God specifically condemns in His Word. I had to repent.

Homosexuality, simply defined, means sexual behavior with same sex. It can be applied to both male and female. The male homosexuals, we call "gay." Homosexuals who are females, we use the term "lesbian."

According to the Bible, God our Creator specifically condemns and forbids homosexual behavior.

"For even their women exchanged the natural use for what is against nature. Likewise also the men, leaving the natural use of the woman, burned in their lust for one another..." (Romans 1:26-27)

The Bible describes homosexual behavior as animalistic rather than human. 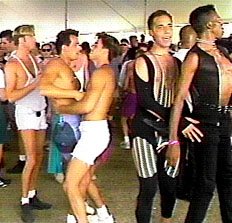 Thus, because such behavior is essentially animalistic, those who practice it are actually called "sodomites" and "dogs" in the Bible.

"There shall be no whore of the daughters of Israel, nor a sodomite of the sons of Israel. Thou shalt not bring the hire of a whore, or the price of a dog, into the house of the Lord thy God for any vow: for even both these are an abomination unto the Lord thy God." (Deuteronomy 23:17,18 KJV)

The Bible not only describes homosexuality as detestable and condemnable. It also calls for the divine punishment of those involved (Leviticus 20:13). The homosexual perversions of the inhabitants of Sodom and Gommorah caused God to rain fire and brimstone in their city in the days of Abraham. Their unrepentant attitude led to their destruction and judgment of God (Genesis 19:24-25).

God punished homosexual conduct in the past. So, it will also be punished by God today and in the future.

"...Neither fornicators, nor idolaters, nor adulterers, nor homosexuals, nor sodomites, nor thieves, nor covetous, nor drunkards, nor revilers, nor extortioners will inherit the kingdom of God" (1 Corinthians 6:9-10).

For the Christian who believes the Bible, there can be no doubt that homosexuality is a grievious sin in the sight of God. Despite great pressure from society to tolerate or accept homosexual behavior, the Bible makes it so plain that it's really unnatural and animalistic wickedness. Those who fear God must reject it.

At the same time, we cannot forget the fact that Christ died for our sins. That includes the sin of homosexuality. "Hate the sin, but love the sinner" surely applies to homosexuals. Homosexuals need to be prayed for and "loved into the Kingdom," no matter how hard it may be.

Note the Apostle Paul's admonition about the very real possibility of such deliverance:

Be not deceived: neither fornicators, nor idolaters, nor adulterers, nor effeminate, nor abusers of themselves with mankind, ...shall inherit the kingdom of God. And such were some of you: but ye are washed, but ye are sanctified, but ye are justified in the name of the Lord Jesus, and by the Spirit of our God. (1 Corinthians 6:9-11 KJV)
Email Post