Dreaming the Dreams of God with NPWM 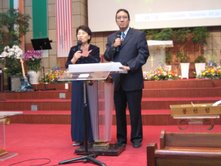 As I board plane from Philippines for Korea, I was somewhat overcome at the sights and sounds around me. Everything is Korean, including the signages! Those of us in the Philippines hear stories about the growing affluence of Korea nowadays. But until you see it with your own eyes, the stories seem like a fairy tale.

I live a normal, simple life in the Philippines. As I would do in the days ahead of my brief visit to Korea, I tend to compare their lifestyle to that of us in the Philippines and to that of other native ministers in other countries like India, Indonesia etc. Then I discovered Korean pastors and churches enjoy lots of food, nice homes and cars, and have closets full of things!

And I remembered the years I traveled as a pastor/teacher in my own country with erratic provisions and simple clothings. Affluence of course is not bad in itself. But it can be taken to extremes. There are so different economies in Asia where God's people live like in India, Bangladesh, Vietnam etc. And I wonder about how can so different economies co-exist simultaneously in Asia and the rest of the earth!

The Bible says, "some plant" and "others water." The Lord has been taking me to Korea where the world's largest churches are found to involve me in native partnership for Christ's Gospel work. This is where the balance comes in. Korean churches from different denominations dream dreams of God together with others in the Body of Christ throughout the world.

The policy of NPWM is this: native partners. It is one where transdenominational Korean churches primarily help (through prayer intercession and funding support) send forth native missionary workers in the harvest fields rather than Korean staff. Today, it is outrageously expensive to send foreign missionaries overseas. Thus, from a strictly financial standpoint, sending native missionaries is wise stewardship.

There is one more important reason why native partnership in missions is wiser. God has been raising up indigenous leaders in different cultures and nations who are more capable than outsiders to finish the job. For any missionary to be successful, he must learn a foreign language and identify with the people he plans to reach. Statistics and experience show that most westerners and other foreign missionaries usually cannot do this. This explains the ineffectiveness of many foreign missionaries today with their colonial-style foreign missions.

I believe NPWM is being used by God to move mightily among native missionaries, pastors, and workers. It is transdenominational, thus taking a step to unite the greater Body of Christ. With the prayers and material blessings that God has been showering upon Korean churches, we can help native evangelists and pastors and their families move forward to complete the task of Christ's Great Commission. 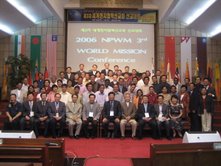 Anonymous said…
Yes, it has been a blessing to be part of the Korean Missions, particularly the NPWM. I can proudly say that there was and still is a sincere purpose for the koreans to help unite and empower the Body of Christ. Their monetary support over and above their prayer support really helped the local ministers. However, there are pros and cons in the manner the support is given, especially to the recipient.

As I have observed and experienced, monetary support really empowers the recipient but it can also dis-empower them. I still believe that the purpose why the support is given should be made clear to the recipient. By this way, we minimize mis-use of funds and fulfill its purpose.

I will be coming up with an article discussing this topic and I will keep you posted once it is uploaded in the internet. The title will be "Filipino Christian Workers in the Market Place."