Overcoming the Temptation to Sin 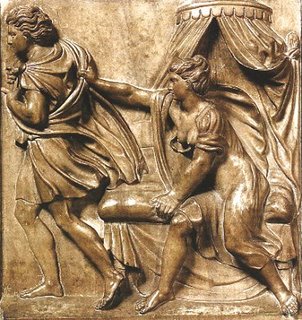 One time, while I was in a foreign land, a woman invited me over to her house. I thought there was a group party for she was one of those taking care of guests like me. So, I agreed. And we took a walk together to the house where she led me.

When we arrived and entered the place, I discovered there was no party. Just the two of us alone in an apartment that was so quiet and private. I sat down, while she prepared dinner for the two of us. That tempted me to start imagining things. How could she do this! At that moment, I thought of my love for God and my wife. Upon realizing what's happening, I quickly hurried to the door and said goodbye.

I'm reminded of Joseph and how he overcame the temptation to sin. "And though she spoke to Joseph day after day, he refused to go to bed with her or even be with her. One day, he went into the house to attend to his duties, and none of the household servants was inside. She caught him by his cloak and said, 'Come to bed with me!' But he left his cloak in her hand and ran out of the house." (Genesis 39: 10-12)

Joseph did some practical steps to defeat the temptation to sin. He refused the temptation. He literally ran away from the scene of temptation. He resisted the devil and the flesh, which are sources of the temptation. I'm sure that, because of his passion for and commitment to God, he was able to fight the battle and walk in victory.

I find Genesis 39, in verse 10 interesting, which reads: "And though she spoke to Joseph day after day, he refused to go to bed with her or even be with her." Why did Joseph refuse to "even be with her?" I wonder what was the harm in talking or being with her as long as he did not go to bed or have an affair with her. That was Joseph's secret of victory! He didn't allow openings to play games and for the devil to have opportunity to strike. Joseph overcame sexual temptation by rejecting both the temptation and the object of temptation.

These principles of victory do not apply only to sexual temptation. They also apply to other kinds or categories of temptation, like love for money, selfishness, tendency to compromise or hide truth ... and many others. You refuse. You reject. You run. You resist. God's wisdom does reveal these practical steps for us to guard our hearts and remain pure and faithful before Him.

Integrity, faithfulness, and purity cost Joseph a lot. He lost his job as well as landed in prison (Genesis 39:20). Eventually though, God honored Joseph's faithfulness with much more than what he had. Joseph passed the test. And God's blessings caught up with him.

In this generation, there are modern-day versions of Potiphar's wife. She will attack you and I when we least expect them. She lurks in internet, television, movies, magazines, the businesses we do, and even in flesh and blood. She'll continue to pursue and tempt you. Remember Joseph's example of dealing with Potiphar's wife.

Be careful and lean always to God for victory.
Email Post

Anonymous said…
Me again! I just went back and reread your article again and was shocked and amazed again! I had just finished posting an article about guarding our hearts, and see that you mentioned it too. God works in mysterious ways. I think we all need to do a heart check today--make sure they're right. God is speaking and we need to listen closely! Thanks again! This was great! 'Flee the devil and he shall depart from you'. He's very wily. I have heard that endless question being asked--can men and women really be just friends? Yes, they can. I have many male friends and cannot even imagine it going in any other direction. God has blessed me with good friends, male and female. I believe if these friendships ever threatened to spill over into anything else, God would let me know, and like Joseph, I would have to just let the axe fall on the whole relationship. If you remove the stumbling block you cannot fall over it. Thanks! Beth
Sunday, 29 October, 2006

Anonymous said…
Angelo, this is a blessing to read. You have addressed adequately an issue that we all confront daily, temptation. God bless you for sharing this with us.
Thomas
Sunday, 29 October, 2006

Dr. Angelo O. Subida said…
Hello Beth and Thomas!
I'm so blessed and happy about how the article has touched and ministered to you. Thanks for your warm, perceptive comments. You make my Christian journey a joy indeed with your company. Cheers and blessings to you and your families!
Sunday, 29 October, 2006