CNN Sees A Growing "Motherless Generation" in the Philippines 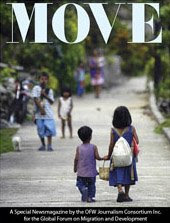 What happens when a mother goes abroad to work and leaves the children behind?

While listening to a pastor today sharing a message on mothers, a number of my feelings and thoughts on "OFW mothers" got confirmed. He made mention of and read a recent CNN news feature calling the growing numbers of children in the Philippines a "motherless generation." CNN explains that, with the world's ever-increasing demand for "female labor," there are now thousands of Filipino mothers leaving their homeland to work. According to the statistics, an unprecedented half of the new overseas job hires from the Philippines are now women and mothers.

According to the latest CNN news, here's the fruit of this: "What people don't know is what the Philippines will look like when the millions of children these workers are leaving behind grow up. A UNICEF-commissioned study estimates that roughly one in four kids — about 9 million children nationwide — have at least one parent working abroad. More and more, that means a mother living halfway around the world for 10 or 15 years at a time. The government rightly applauds "Overseas Filipino Workers," or OFWs as they are commonly called in the country, as heroes for the sacrifices they make for their families. But while children whose mothers are nurses in Canada or housekeepers in Hong Kong often go to good private schools and have MP3 players, there is a growing sentiment that trading global dollars for a generation raised on cell-phone minutes is a raw deal. Carandang, who works with families of migrant workers, named her most recent book after one boy's lament for his mother working as a caregiver in the Middle East: 'The light of the home is gone.' "

It's heartbreaking. Not something to be proud of. The Philippines is creating and has created not just a "father-less generation" since the start of this unprecedented exodus of OFWs. It is now increasingly developing a "mother-less generation" of Filipino children in the country. Indeed, as labor migration increases, broken families surges. This brings the question of whether or not being an OFW (overseas foreign worker), leaving the home behind, is moral and ethical.

Though I've worked with OFWs in the countries I visited, I've never been an OFW. Primarily, it's because I believe what God considers most important and I choose to raise my family and children here. Contending with culture, I've to check where my highest values lie. I know it's tough. And mostly the issue for millions of Filipinos is family financial survival. But still, with that reality recognized, wouldn't God be above all that and provide for His own? God has a way where there seems to be no other way. Ultimately, it's a matter of true faith in God and obedience to His will.
Email Post