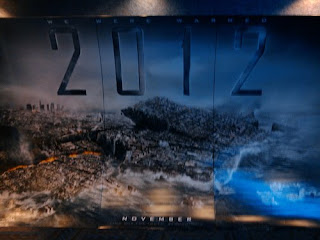 Last night, after church, my daughter Christine asked us to watch "2012," one of this year's most popular movies. The movie predicts end of the world or holocaust on December 12 or 21, 2012 based on astrology and the mayan calendar. Major movie studios, websites, Newsweek, books, and numerous media channels are now fanning the "2012 end of human history" craze. There goes again, like the Y2K, the end-of-the-world prediction!

It is true that the Bible is filled with prophetic statements, which includes "end of the world." You and I only have to read and understand the books of Revelation, Ezekiel, Daniel, among others, to confirm this truth. Revelation 6: 1-17, for instance, mentions judgments released upon the earth in the form of 7 trumpets, two witnesses, a dragon (the devil), a beast (the anti-Christ) and false prophet, and 7 golden bowls. The judgments passed on to the earth and its inhabitants shall be in the form of earthquakes, plague, hailstorms, fire, famine, meteor storm, lack of drinking water, and many more!

Bottomline, the biblical "end of the world" prophecy has to do with the battle between good and evil. Following the catastrophes, the bible prophecy leads us to the emergence of the anti-Christ in partnership with the devil and false prophet (unholy trinity) to rule the world for a period of time until the Battle of Armageddon. At this point, Scriptures states that Jesus Christ returns to earth and destroys the forces of the anti-Christ. Then the false prophet and the anti-Christ along with the devil are thrown down into the lake of fire.

Now regarding what the movie (or astrology or mayan calendar or even Nostradamus) predicts to be the date (December 12 or 21 of year 2012) these will begin to take place, our Lord Jesus Christ Himself made a clear statement. In the Gospels, Jesus taught His disciples and confirmed the signs of His coming and the end of the present age. While giving His disciples signs to watch for, Jesus stated clearly that no one knows the exact date except His Father.

"Watch therefore, for you know neither the day nor the hour, in which the Son of Man is coming" (Matthew 25:13).

What are we then to do amid all these 2012 predictions?

Friends, whether or not the end of the world is in 2012 or near, the question we all need to ask ourselves is, "Am I ready?" Following evil in this life leads to separation from God and His judgment. Accepting Christ as Savior and Lord and living for Him gains entry into eternal life with God. The purpose of bible prophecy is the reminder of our need to be closer to God and preparing for Christ's return and end of the world, in 2012 and in every year of our lives.

"Therefore you also be ready, for the Son of Man is coming at an hour you do not expect" (Matthew 24: 44).
Email Post