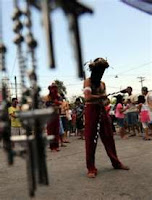 As I've always been sharing in this site, therapy at its best includes spirituality and not just internal psychological dynamics. When I say that, I don't mean religiosity (or, religious fanaticism), which is just another form of postponing rather than processing pain.

In Ortigas, at a faith-based community, a middle-aged single woman was found exhibiting unusual behavior. She would be in the church each day and join almost all religious activities. She would be found praying for the sick, chanting strange syllables and vomiting afterwards. She'd also be found moving around extracting dubious monetary transactions among church members. This poor woman was stuck in an unreal world of religious fanaticism.

Religiosity is generic, another do-it-yourself attempt to avoid pain rather than deal with it. It's common to hear people stuck in this claiming "I found peace" just after some trauma happened and they went into a form of religion. In reality, they are simply saying "I don't want to face the pain now." They will go through repeating religious acts, not in an earnest attempt to know God, but in an attempt to avoid dealing with the roots of their own personal pain.

Don't miss the difference! Religion is man's search for God. Christianity is a personal relationship with Christ in one's life.
Email Post