You Can't Cure Yourself 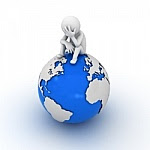 Willie was addicted to his anger. When I met him, he could turn any memory or situation into one in which he felt big - by getting angry and mad. He became dependent upon his anger as an attempt to cover over his hidden personal pain. Willie's problem with anger dependency is not dependency per se; it's dependency upon anger.

Gradually, during our sessions, Willie began to let me carry some of his emotional load. He found himself feeling less alone. He discovered that he did have a whole range of emotions and "unprocessed pain" he needed to talk about. His angry outbursts then came less frequently. He just needed someone he could stand next to and feel safe.

One's personal recovery or healing is never meant to be traveled alone. No one could function in isolation. Attempting to heal one's self is a violation of how we human beings are created to be. Step two of the twelve steps of AA is: "We came to believe that a Power greater than ourselves could restore us to sanity." This world-renowned AA therapy program knew how to find serenity - stand next to a Higher Power.

Where in the universe can you find a safer place to heal and stand than next to its Creator?
Email Post