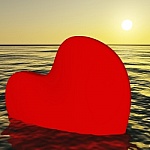 Doing my weekly group sessions in the hospital, I encounter many  people who are breaking down physically. But here's a common thing I never miss - the illness and pain they carry is not chemical or physical after careful diagnoses. It's mostly from emotional, psychological, and spiritual reasons that simply defy normal medical procedures.

Dr. James Lynch, medical researcher at John Hopkins, wrote a book titled "The Broken Heart." In his book, he sets forth his absolute conviction that the #1 physical killer in people today is loneliness. He tells us that those who live and experience loneliness - single, widowed, divorced - have premature death and suicide rates and frequent incidences of hospitalization from 2 to 10 times higher than do others who live in community. To prove that, Dr. Lynch has actual statistics, tables, and graphs based on 10 years of research.

Just this weekend, I was speaking to a patient who confided that he liked being sick. He said that when he took a sick leave from the office, he actually tried to stay much longer at home even after he felt better so he can be with his wife and daughter. It seems an only way this patient as well as many others in our society can find companionship is to get sick.

Health, indeed, is more than the absence of physical illness.