The longer the time bomb ticks, the closer it comes to explosion. 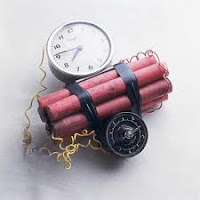 Not long ago, a major showbiz magazine reported the autobiography of a celebrity singer. The article described "significant emotional losses" in her life. After several years of fame and fortune as a star, she developed behavioral disorders. Just in her 40s, she was found dead inside a hotel due to a drug overdose.

There is a saying, "The longer the time bomb ticks, the closer it comes to an explosion." The same is true with the pain of unresolved grief or emotional losses. Through isolation or cover-up, some people move away from the very feelings they must face in order to heal.

When you bottle up (or: freeze, numb, suppress, hide) feelings caused by loss or pain, it's like starting the timer of a time bomb. In the beginning, the bomb ticks softly. The ticks represent pains or problems experienced by people who are unable to successfully heal and grieve. The longer a person bottles up painful feelings (instead of processing them), the closer he or she comes to some serious life-damaging consequences. Ticks of the bomb do progressively approach explosion.