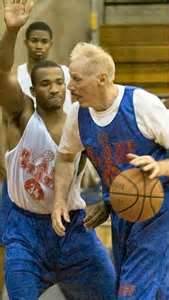 Old age is a time when people are advised to take it easy. To start living life very cautiously, even passively. To avoid any adventure or danger. Would that be healthy? Is that actually conserving of life or hastening the whole aging process?

When I was much younger, I used to play a lot of basketball. One time several years ago, at a game in Ateneo gym, I was surprised to have an elderly player in the court as part of the opposing team. He was fast and strong! It had nothing to do with his age. It had much to do with his attitude to the challenges of life.

Golda Meir was 71 when she became Prime Minister of Israel. George Bernard Shaw was 92 when one of his classic plays was produced. Benjamin Franklin was a framer of the Constitution when he was 81. Mother Teresa in India served in the worst slums, ministering to the hungry, the ill, and the dying during her 60s onwards.