The Grace of Ageing 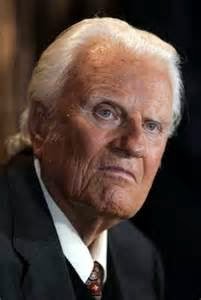 I'm not alone on this one. I admire Billy Graham, now age 95. In a few weeks' time, he'll be holding one of the biggest crusades and speaking engagements he'll ever have in the U.S. So far he had spoken to millions of people around the world, including heads of states. He is running forward and never retiring from life. He is indeed an inspiration to me as well as countless others of all races.

History is replete with other more examples of great men who refuse to stand still in the midst of ageing. Here are just a few:

*  Alexander Graham Bell was 84 when he invented the telephone;
*  At 91, George Bernard Shaw was still writing plays;
*  At 75, "Peanuts" creator Charles Schultz was still able to play hockey;
*  At 100, grandma Moses was still painting pictures;
*  At 94, Leopold Stokowski signed a 6-year recording contract;
*  Roget, age 90, was updating his famous Thesaurus before he died;
*  Tesichi Igarishi celebrated his 100th birthday by climbing the 12, 395-foot-high summit of Mt Fiji;
*  In their 90s, pianist Arthur Rubenstein and cellist Pablo Casals both performed professionally;
*  In biblical history, Noah became a father of three children at age 500 and completed the ark 100 years later!

Since reading Billy Graham and learning from his life and the lives of other ageing greats, I've done some reconsidering and reflecting. These gracious seniors never retire. They may had slowed down and walked away from some activity. But they all still live life with a mission. With this discovery, I prepare my self to age as the Lord permits. My idea of old age is definitely changing.

A bottom line is, as we grow older, things that matter in heaven should matter more on earth. As we age, the stuff of earth increasingly loses its value or urgency.