Which Is More Precious To You? 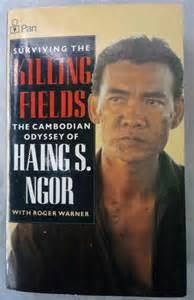 Some years back, I watched an Oscar award-winning war movie entitled "The Killing Fields," starred by its real-life Cambodian survivor. The horrors Haing Ngor survived in the hands of the Khmer Rouge were unthinkable. A time after the war, he went to America to live a new, comfortable life but was murdered in the street of Los Angeles.

Reports indicated that when a street gangster held him at gunpoint, Haing Ngor gave him his $6,000 Rolex watch. But then the gang demanded for him to surrender his gold locket around his neck containing the photo of his wife murdered by the Khmer Rouge. Haing refused to give it up. For that, the gang murdered him.

It's a tragic, unexpected end for war hero, Haing Ngor. When I learned of how he lost his life, I'm reminded of the preciousness of people in our lives and their memory. To Dr. Ngor, the photo of his wife meant more than life itself.

Indeed, relationships are so precious in life. Some wouldn't surrender them for all the world.
Email Post