A Way In The Storm 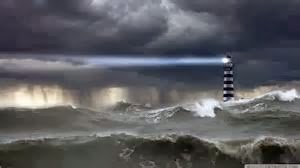 Therapy or life recovery is about dealing with storms. Life is literally filled with lightning and thunder and rain and wind. No one is exempted. They are across everyone's horizon. Sometimes we "need" these storms.

William was depressed and suicidal.  At one period of his life, his life felt too heavy with clouds choking out all hope. He tried to end it all one morning by drinking poison. It failed. Then, he hired a driver to take him to a river to drown himself... but was "strangely restrained." The following morning, he threw himself to a sharp knife on the floor and broke the blade! Still failing, he tried to hang himself but was found and taken down unconscious ... still alive.

Sometime later, William found a book in his room. It's the Bible. When he opened it, he was led to the book of Romans. In his darkest moments, he was able to read the whole book of Romans in the Bible. It was there that William met the greatest Therapist who ever lived, the God of storms. At that time, in the center of his storm, William finally found inner healing and peace. He submitted himself to the One who had pursued him through so many of his stormy nights and dark moments.