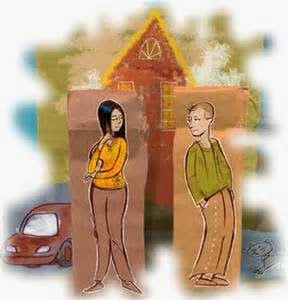 Today, a fast-growing number of psychologically and emotionally wounded are the "separated but still married." Whatever the cause of the separation (e.g. adultery, addiction, violence etc.), quite a few seems to understand the tremendous pain and complications of those experiencing marital separation.

Assisting and relating to individuals through separation in therapy sessions, I've witnessed the trauma strike emotionally, mentally, physically, and spiritually. I've sat down with women cry rivers of mascara and men sob like children. I've held more weeping men and women than I ever dreamed would come across my path.

Separated spouses' common question in their thoughts is, "Is it right and healthy to date while separated but still married?" The answer is no. It brings psychological, emotional, and spiritual damages not only to the marriage but also to the children and family. Since there is still an existing marriage, dating, sex, romance or bonding with another person has no right to exist.

An unfaithful wife who is having an affair justifies by saying "But I'm separated!" Her perception belies reality. It's self-deception, a mind game. God does not participate in such deception. Even friends and relatives know the score. Separated is married. If one wishes to date and have a romantic or significant relationship, he or she must first bring finality to and legally end his or her marriage.

Author Joe Beam coins a term, "insulated immorality." By that, he refers to those who remain married, but are separated and dating or having sex with another. They are in effect refusing to face their conscience and take responsibility for their actions. Beam says they "insulate themselves against strong guilt" by justifying or rationalizing around their immoral, selfish behavior.

In the latest DSM V psychiatric manual of mental disorders of the American Psychiatric Association, Beam's "insulated immorality" is sexual betrayal falling under the manual's subcategory "sexual violence." The Bible calls it the sin of adultery, sexual immorality, or unfaithfulness.

Regarding parenting/children of the separated and dating, Joe Beam writes:

" A person who remains married for the children’s sake, but is separated and dating, refuses to be what a parent should be. Children see and hear nearly everything. A parent who thinks she gives her children comfort by not pursuing divorce breaks their hearts if she dates. Because she has not divorced, they hope she and Dad may get back together, but that hope becomes confused when she dates someone else. (Of course, this applies to both parents.) Separation implies their parents could reconcile. If either parent has no intention of ever reconciling, separation creates a mean tease. Either reconcile or bring finality so that they can accept and adjust."

In life and therapy, truth heals. Deception destroys. If you are separated and still married, do the right thing. Whether you wish to save your marriage or not, seek help.