The Healing Of Pacman 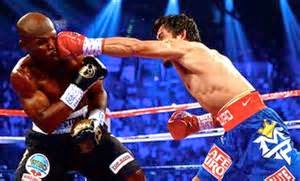 As I write this post, Manny Pacquaio or the Pacman just won a spectacular comeback victory over Tim Bradley to regain the World Welterweight boxing championship. It's interesting to note that the fight took place during the Holy Week and Pacman returns to the Philippines on a Good Friday. This seems to carry a lot of symbolism for the "rising" Filipino people.

The Filipino pride, shortly after the victory, gathered all his friends and team members in his massive suite at the 61st floor of the Hotel at Mandalay Bay. For what? For a night of thanksgiving praise and worship unto His God, not a night of wine and women to celebrate the victory. Pacman was right there in the middle of his victory worship service, singing and playing the piano, ironically in front of a huge picture window overlooking the Sin City strip of the MGM Grand, Las Vegas.

This most famous Filipino is one example of the integration of mental health and spirituality. Once a womanizing, gambling, party animal addict whose idea of happiness is cockfighting and singing rock songs after fights, Pacman now finds his wholeness and meaning in life in serving God and obeying His Word. Pacman has fame and wealth that don't get into his head (unlike many others) and which he now considers far less important treasure than his personal relationship with His Savior.

If you want the real deal, learn from the healing of Pacman.