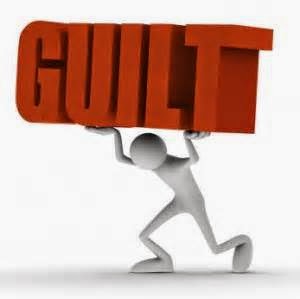 Guilt is self-blame. It's a realization that one has violated some principle, usually moral, ethical, or religious. It predisposes one then to lower ability to face life's stresses. Guilt, whether true or false guilt, can turn destructive if left unaddressed or unhealed.

Shakespeare, in one of his novels, describes two murderers: Macbeth and Lady Macbeth. Both murderers suffered intense guilt reactions after the death of King Duncan. Macbeth's guilt produced hallucinations while Lady Macbeth began sleepwalking and compulsive wringing of her hands.

At times, in the hospital, there are patients who complain of guilt and would attempt to punish themselves by suicide or self-harm. Guilt feelings do prey on a person's mind and emotions to bring about a breakdown. In numerous cases of mental illness or psychopathology, the central problem is guilt. Unconfessed, unprocessed guilt inside. Personality disorders are always produced by this kind of real guilt.

How does one heal from this "wound?" It can be radically healed and resolved only by confession and repentance. It's a beginning to total freedom.
Email Post
Labels: counseling psychotherapy Manila Philippines Filipino affair recovery filipino counselor filipino psychotherapist guilt