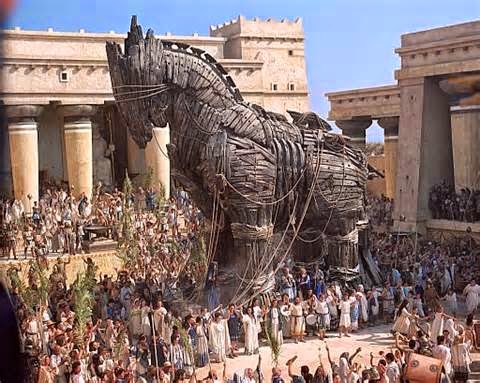 Many parents and spouses ask, "What happened to our family? I can't understand it."

In many instances, there is a "Trojan horse," an enemy that was pulled right into the middle of the home. And some parents and spouses don't even know it!

Around 1200 B.C., the city of Troy had been under attack by the Greeks for 10 years. But they could not conquer Troy because it's strong. So the Greeks came up with a novel plan based on deceit. They built a wooden horse, hid warriors inside, and placed it outside the walls of Troy.

The Greeks mad the mistake of pulling the Trojan horse inside their fortress. While they slept, the Greek warriors slipped out of the belly of the wooden Trojan horse, opened the city gates, let in all the other warriors, and slaughtered the sleeping Trojans! Without realizing what they were doing, the Trojans had destroyed themselves with the self-saboteur wooden horse. They had pulled the enemy right inside into their home camp.

Beware: some modern day Trojan horses may be right in the center of of your home and you are asleep!
Email Post
Labels: counseling psychotherapy Manila Philippines Filipino family therapy filipino psychotherapist marital and relationship therapy and counseling Manila