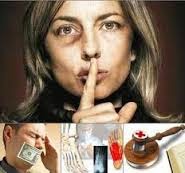 Here is a present-day reality: we live in an epidemic of misdiagnoses in the health care field.

Hilda went to a $ 2-billion hospital for treatment. She was suffering from daily dizziness and rotational spinning. It's an illness that she called a "curse" that had been disabling her personal and family life. After spending over a hundred thousand dollars for tests, medicines, and doctors in the said hospital, she remained unwell.

Then, she decided to go to a natural homeopathy doctor in a little clinic with no secretary and frills. There, Hilda found out that she had vertigo and Vitamin B12 deficiency. Can sound incredible to believe, but these diagnoses were never discovered or mentioned to her in the expensive hospital protocol she underwent. After being given shots of Vitamin B12, Hilda got well and back to normal functioning.

Danny was four years old when his father vanished into a mental hospital with a "nervous breakdown." After receiving a series of shock treatments and potent drugs in the psychiatric ward, his father returned home a broken man. His memory was gone, his personality had deteriorated, and he could scarcely hold a job.

Danny's father, a once-vibrant, personable man, never recovered. The family, with 4 children, plummeted into poverty and fell apart. All the children except for Danny ended up in children's homes. In his adulthood, Danny formed the groundwork for the Safe Harbor Project to help others avoid the tragedy of mental health misdiagnosis he witnessed growing up.

In my own practice, I've also heard and witnessed painful specifics from psychiatric patients. When they came to see me, their lives were already being engulfed by pain and confusion due to the treatment they received. Some of them had even become "vegetables." I don't know all the reasons. I don't even know most of the reasons. But I do know one of the reasons: misdiagnosis. The right mental health treatment is hard to come by these days ... one which is good at going into the "roots."

Indeed, we all need harbors to pull into when we feel blasted by the storms and tragedies of life. We all need a refuge and source for true healing.