What do you mean "Oswald Complex?" 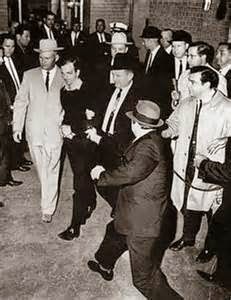 I know this to be such a common experience among us. We all know that we can tell a great deal about who our true friends are when hit by hard times. I hope that during seasons of suffering and pain, friends stand with us and encourage us and protect us to see the promise of a better day.

I hope so. But I know, nevertheless, what crisis can do even to the best or closest of friends. Psychologists used an interesting term calling it the "Oswald Complex." A few days after U.S. president John F. Kennedy was assassinated, lead suspect Lee Harvey Oswald was arrested and being taken to the police station.

Handcuffed to two detectives tasked to protect him, Oswald was suddenly approached and shot by a man identified as Jack Ruby. As psychologists and investigators watched the film of the crime scene, they noticed that when Ruby approached Oswald with a gun, the two detectives actually pulled away rather than defended Oswald from the attack. And thus, the term "Oswald Complex." It became a description for people's act to pull away from those they've committed to protect, shield, or defend when danger comes.

I surmise you may have experienced the "Oswald Complex" yourself. In fact, if you've gone through a humiliating season of crisis, such as financial bankruptcy or marital betrayal, it almost is sure you have. Suddenly who you consider friends disappear. They're confused about what to to do. Some believe in the lies or just withdraw from your company.  Perhaps, even relatives or family members may be stepping away from you or siding with those who mean to harm you.

What you need to do, when dust settles, is take a careful look at the kind of people you choose as friends. It can spell a difference in your future relationships, so you do not cycle through the same betrayals again.