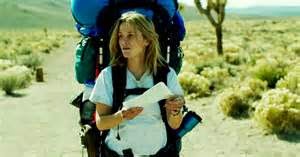 A few days ago, while watching the film "Wild," I felt I'm in a therapy session. Reese Witherspoon portrayed the true story of a woman whose adulthood was deeply wounded by childhood trauma. Her wholeness, compromised by a chaotic, child-beating thug for a father, warped her so badly.

She became an addict - a nymphomaniac or sex addict - that led to a divorce from her loving husband. Her mother tried to compensate for her father's abuse and drunken violence. But, to no avail. Only after her mother died did Reese's character realize how broken and wretched she was needing redemption. And the way she tried to save her self was to force her self to trek a dangerous thousand-mile length hike of the Pacific Coast Highway.

In the film, Reese's character met a psychotherapist. Here was a woman with a tragic mix of psychological, sexual, and addictive horrors. She was so warped that she'd deny reality and project blame to circumstances or other people. After a few short exchanges, the therapist unleashed a biggie, clinical diagnostic question, "Who detached from you?" Indeed, her life story in the film serves as a solemn, cautionary message to all fathers and mothers among us who are entrusted to parent children in loving and connecting ways.

As I reflected on the film's theme and progression, I realized that it carries a powerful healing insight or message. Witherspoon's character is not alone. She is not the only one in the world who has a "wounded inner child" who's gone on the arduous journey of recovery. A lot of individuals, men and women, have been with every step of Reese's character in the film. They've experienced a dialogue in it, which includes "I didn't know where I was headed - until I got there."