Messages From The Unconscious 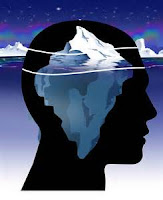 When you are in the grip of the "unconscious," applying Dr. Freud's theory, you are not totally aware of why you do or say things. "Unconscious" thoughts, feelings, and behaviors usually contain unwanted negative information. They don't appear on the surface but buried underneath. They are experienced as absolute facts. They're automatic.

Often a counselee and I can understand messages from the unconscious by discussing it together. One afternoon in a therapy session, a housewife recounted one of these "direct insight" messages from her unconscious. She is pretty and articulate, yet has been reclusive and afraid of social functions for decades now in her marriage. Her self-esteem is so low. She could not figure out how to proceed from here to change.

Then, at one point, she started to sob. She recalled how much she was physically and emotionally abused by her mother since she was a child. Much of her childhood was spent serving along with the yayas in their affluent home. Her mother would punish her in varied ways and prevent her to leave the house to play with others her age.

Seeing the obvious, I processed with her this traumatic childhood past that she has had. She then was able to look more clearly in the mirror to see where her current unwanted feelings and behaviors may be coming from. She begun understanding herself more deeply since then, struggling though she still is overcoming her current "unconscious" automatized emotions and beliefs about her self.

William James once wrote, "The greatest discovery of my generation is that human beings, by changing the inner attitudes of their minds, can change the outer aspects of their lives." Years of experience as a psychotherapist have taught me that the roots of psychopathology and addictions are attitudes and beliefs coming from the "unconscious" mind. It's necessary to get beyond the verbal, conscious level to make sure that what's being addressed in the recovery process is truly what really is.