Train Psych, Any One?

I've been thinking today of trains. Trains are weird places, don't you think? Especially crowded ones.

In numerous occasions, I'd have speaking tours before Koreans and Filipinos in Seoul (also in other parts). Whenever I'd ride their trains, I'd be with fellow Filipinos. Like in the Philippines where MRT is always overcrowded with people, trains in Seoul can be so full during peak hours there isn't room to turn around. One time, my fellow Filipinos and I had a big laugh together. And the Koreans, with whom we occupy common space, would just stare and frown at us. Strange.

I've been reflecting that a passenger train is a microcosm of the world today. You're crammed in close with lots of people. Yet nobody talks. You try hard not to touch others. No smiling. No eye contact allowed without consent. Anonymity, isolation, and independence are the uniform of the day inside trains. It's a most amazing thing if you think deeply about it. Healthy social interaction, relating to people, gets diluted by the "train mentality."

I read of an article in Psychology Today entitled "The Age of Indifference" written by psychologist Dr. Philip Zimbardo. He pulls no punches as he writes:  "I know of no more potent killer than isolation. There is no more destructive influence on physical and mental health than the isolation of you from me and of us from them. It has shown to be a central agent in the etiology of depression, paranoia, schizophrenia, rape, suicide, mass murder .... "

That hurts. Yet we must come to terms with this observation. We must come down hard on it. The need is so huge!

Stop the train. I'm getting off. 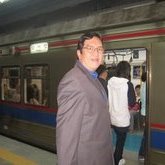