A few days ago, I was invited to CNN Philippines to give a talk on infidelity treatment during a live hour-long TV broadcast. I told Gani and Amelyn, the program hosts, that infidelity is a "deepest cut" and devastating to marriage. It's important to resolve the crisis and rebuild relationship whenever possible.

Much of what I shared with the hosts were drawn from my combined clinical practice and personal experience as a psychotherapist as well as pertinent research by experts on the subject. Myself as well as together with other colleagues have witnessed the impact of infidelity on the lives of hundreds of men and women whom we have counseled, both individually and in groups. 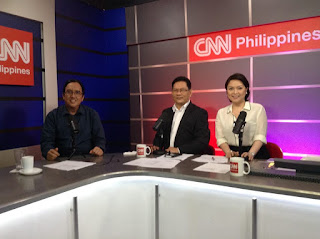 Because marital separation or divorce rates continue to be high, and because infidelity plays a role in the dissolution of many marriages, CNN Philippines found it so important to know more about it. For many couples, going to a therapist may not be an option due to finances or embarrassment. And often, the unfaithful spouse is not willing to come for counseling. The program's segment was geared to help those individuals and couples who may be trying to work out their problems without professional help, at least initially.

William Shakespeare, in his Hamlet, wrote:  "There are more things in heaven and earth, Horatio, than are dreamt of in your philosophy." When he wrote those words in the 17th century, Shakepeare could not had imagined a different world with internet communication, cell phones, or space travel.  Today, infidelity is carried on over social media, internet, or on a broadband. CNN hosts did touch on these things during our telecast. Without Shakepeare to add more or guide us, we will have to reason it by ourselves.