The Psychological Violence of Verbal Abuse 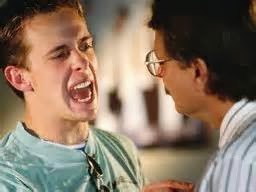 Here below are some things I hear or witness from my sessions involving individuals, couples, or families. They are characteristic of verbal abuse, often escalating in intensity, frequency, and variety over time. It's a common source of emotional woundedness and breakdown in relationships.

"He says he loves me, but he's angry, irritable, and always putting me down."

"My Mom says he's accepting of my choices but she criticizes me and won't accept my views and feelings."

"She says she can say anything she wants to say to me in whatever way she wants."

"What are you complaining about? I talk to you."

"You take everything wrong. You feel too much."

Verbal abuse is psychological violence. It attacks or injures. Generally, it's a means to control, manipulate, or have power over another person. Verbal abuse can cause a person to believe the false or distorted perception about himself or herself. It may also cause one to speak falsely or react violently to the other one.

Obviously, verbal abuse prevents real intimacy or relationships. However, it occurs many times that the victim of a verbal abuser may think the illusion that he or she has a real relationship. In multiple cases, verbal abuse escalates to physical abuse. This transition is important to note because the clinical experience of therapists provide evidences that battered women have been verbally abused.

I remember one woman who endured years of criticizing, name calling, and blaming from her husband and still chose to stay. There may be a number of reasons. But for her, as she narrated during our session, an important reason being her need to function adequately in her role as a mother and provider to her kids. She may never know or acknowledge that she's a victim of psychological violence created by verbal abuse.
Email Post
Labels: addiction therapy and counseling Manila marital and relationship therapy and counseling Manila Philippines Philippines counseling and psychotherapy pornography and sexual addiction counseling Manila