Are You Enmeshed With Your Parents?

Adult children of "poisonous parents" can have so much need for parental approval. As a result, it prevents them from being grown-ups and living their fullest potential. They may appear adult already, but they don't feel like one. They remain enmeshed with their parents way past the time of normal human development. 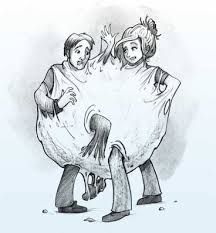 Glenn learned early in life that he has a mother who takes charge of things for him. From personal allowances to schooling and relationships, his mother would interfere and dictate to him what to do. Despite his mother's verbal negativity and control, Glenn felt comfort as she showered him with gifts and cash. He spent his entire childhood searching for the holy grail of always pleasing his mother. This type of relationship then that Glenn has with his mother kept him bonded to her long after he reached adulthood.

As difficult as it may be to accept, Glenn's kind of relationship with his mother is self-defeating. He never grows up and acts like a grown-up. The enmeshment Glenn has with his mother prevents him from being a separate and independent adult person. It increases his dependency and robs him of his adult power. Majority of his life decisions have become based on how his mother would feel. So, since it's his mother's approval and feelings that always come first, she remains in the driver's seat of Glenn's adult life.

Are you still enmeshed with your parent?  If so, understanding this enmeshment and your feelings is an essential step to putting a stop to self defeating, immature behaviors!