When Dina and her husband Tim consulted me for the first time, I tried to support them in becoming clear about what they're hearing and saying to each other. Unfortunately, Tim can't help but be verbally abusive of Dina during our session. He'd call her names, constantly accusing and blaming her. Needless to say, Tim remained feeling justified in escalating horrifically his verbal assaults of Dina and shifting his responsibility onto her. 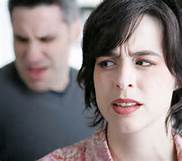 For the first time in her marriage, Dina saw that she was not to blame for the abuse. She's not responsible for any part of it. Her husband Tim was the perpetrator. With this emergent awareness on her part, Dina felt empowered. She's able to re-frame her thoughts and feelings, and devise a behavioral plan, based on a more accurate reading of reality.

Surely, unless Tim chooses to look into himself, he will not perceive his abuse and lack. If he does decide to look into his own inner "beast," he will witness a life spent, not in living, but in hiding his self from himself. Unless Tim actively seeks personal rehabilitation through the hard work of therapy, he will live a "nonlife." This is his own personal tragedy.