Psychology speaks of the existence of a "false self" in a person's psyche.  This part of the self hides secrets, necessitating erecting an accommodating exterior or mask.

All work on self discovery and recovery comprises this psychological concept of "false self." It lives a life of not following the truest and deepest inclinations of one's core being.

Dependent or non-autonomous, the "false self" is unable to disengage from social, cultural, and instinctual conditioning. It can not make choices that reflect one's true self, identity, and personal mission.

Nora is a 50 year old patient who sought therapy for her low self esteem. In our sessions, she continually anguished over her health, the approval of her husband and children, and what people say about her physical appearance.

She suffered from depression, anxiety attacks, and exaggerated concern of other people's opinions. Hypersensitive, she bordered a lot toward hypochondria and eating disorders. As a result, she caused her self unnecessary trouble and wounding in her relationships.

Upon deeper probing, I found out how much Nora was hurt and traumatized during the normal formation of her persona since childhood. Her mother treated her as if she's one of the house maids when she was a little girl onwards.

She received verbal, physical, and emotional abuse from her mother for so many years. Her mother definitely failed to respond to her basic needs. To survive, Nora's only choice was to hide who she is and use defensive, rigid adaptation defenses. 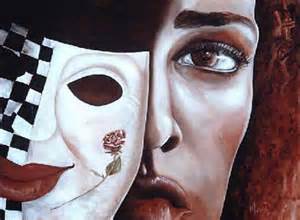 Nora is not alone. Countless individuals develop a pathological "false self" due to ancient false efforts for adaptation caused by parental mistakes or abuse.  So disturbed in a primary relationship by numerous frustrations and hurts, a child learns to build a protective defense wall.

Instead of presenting a healthy persona, the wounded child tries to ward off the outside world which is experienced as hostile and rejecting. Far from being conscious, the unhealthy adaptation only leads to deeper alienation of the true self.