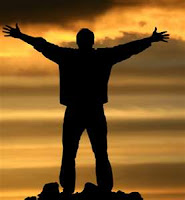 "Death is the ultimate statistic. It affects one out of one."
-- George Bernard Shaw

"Death is no paper tiger," once wrote psychologist Dr. Carl Gustav Jung. Beyond age 35, according to him, death is a common universal source of anxiety or preoccupation in our lives. It's also a revealer of one's actual state of Self, mental health, and overall wellbeing.

In the process of getting older, death anxiety usually looms progressively larger. The threats of cancer, heart attack, and costly hospitalization are terrifying. People show a variety of responses to this inevitable, heavy reality of eventual physical self-obliteration. Generally, one's response can either be helpful or harmful to one's self-integration and wellness.

In many respects, death makes people anxious. Witnessing the death of a loved one, friend, or stranger can make us more sensitive to mortality. Even while expressing hurts or seeking comfort from others, we tend to steel ourselves against death fears.

And we pass the years with our most vulnerable feelings on this reality numbed or shielded from the core of our selves. As author Ernest Becker put it, man "is out of nature and hopelessly in it - it's a terrifying dilemma to be in and have to live with."

Many years ago, my younger sister was in a hospital. She had a stroke and had to be confined indefinitely to the ICU. My wife, kids, and I passed by the hospital to visit her but I remembered going anxiously. I felt too uncomfortable. I didn't know what to say when I see her. And she didn't have much to say to me because she appeared dying.  It's awful. But how can I not visit her. She's my sister. So I went. Yet I felt terrible about it.

Dr. Oliver Sacks, a neurologist, maintains that his view of medical practice was changed after he experienced a near-death body injury. He endured months of helplessness in a hospital and then in a nursing home.

He realizes that "there is an absolute and categorical difference between a doctor who knows and one who does not, and that this knowing can only be obtained by a personal experience of the organic, by descending to the very depths of disease and dissolution."

Before we can fully deal with our anxieties or fears about our own death, we often need to experience glimpses of it personally. In my therapy work, I've seen solitary, abusive individuals become soft and more receptive once they sensed that the end is near.

After such glimpses, real changes tend to emerge in the way they spend their time, conduct their relationships, and look at the future. Michael Norvak writes, such "lift his eyes from the sequence of daily routines to perceive the law of his own death, and to struggle for ways of life that assuage death's bitterness."

Death, our self-obliteration, is the final enemy of our human existence. The power of personal experience in facing the approach of death then becomes a grounding of our spiritual Self. It means that we can heal and control death anxiety, and its effects on our body, health, and self-integration, by our faith and beliefs.