What is the "difficult person syndrome?"

When I met Marissa, she's overwhelmed by her emotions. Anger towards her mother and siblings. They're mistreating and abusing her verbally and physically since childhood. As a result, she developed a pattern of difficult behaviors that only alienated her from people around her.

During our session, she acted out her rage, aggression, and manipulation on me. It's as if she needed an outlet for all her pent-up feelings. Obviously, it would do little good to instantly reason out with her while she spoke abusively towards me. She sought help but failed to be open enough to it.

The "difficult person syndrome" is psychologically complex. People generally feel uneasy when a person who manifests it is around. Even with the slightest provocation, a difficult person can be obnoxious. Complaining. Abrasive. Noncomplying. Belligerent. Resistant. Aggressive. Irritating. Hypersensitive.

Mostly, the difficult person exhibits behaviors that resemble that of a needy, demanding child. When she fails to get what she wants, she slips into a victimized complaining mentality. She thinks she deserves and must be given special treatment.

I'm reminded of Peter. After many years of drug and gambling addiction, he was forced by his parents to undergo a much-needed therapy and counseling. He agreed to seek help but he didn't really want it. In our sessions, I noticed the game he's playing with me - the real reason why he agreed to ask for help and counsel is so he can reject it.

An individual suffering from the "difficult person syndrome" is often abused by difficult people in his or her early years. He or she later grows up to be deeply ambivalent. He or she wants help or support from others but fearing it at the same time.

Psychologically, abrasiveness is a defense mechanism or mask of the difficult person against closeness or fear of being injured again. Unconsciously, he or she recreates in the present the early abusive relationship he or she experienced n the past.

So when you're dealing with a difficult person, understand that his or her behavior is not a personal attack on you. He or she simply is "tortured," damaged psychologically by life trauma experiences. He or she needs special therapy and care. To be treated empathically and wisely rather than hatefully or fearfully. 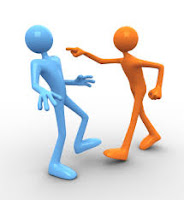