When I was having coffee with a young couple lately, the man had been telling his fiancée to "stick with facts." He said that feelings are not the same as facts. He prodded his fiancée to be less emotional. In effect, the woman felt neglected or unloved.

Neuroscience tells us that the human brain is actually a "twin." It has a left brain (rational, logical, fact-based) and a right brain (emotional, intuitive, artistic).

The left side and right side of the brain are mirror images of each other. 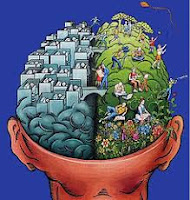 I think we men tend to be more heavily dependent on the left or cognitive side of the brain. We tend to make all our life-changing decisions on the basis of hard, logical facts. Raised or conditioned by a practical culture and work ethic, we want to know the "bottom line" fast enough.

But, more and more, men are experiencing that to make choices based on logic alone is limiting. It can be imprisoning.

Mental health involves using both sides of the brain. Not either/or, but both. IQ and EQ together.

Business is now realizing that. It trains its executives and employees who plot the course of corporations and businesses to use both sides of the brain.

In personal life and relationships, this also holds true. With the left side of the brain, we think through problems of logic and data happening in our lives. The right side of our brain moves us to hope and possibilities - the whole area of dreams and visions rather than reason.

I'm reminded of some senior citizens I met who've felt "too old to dream." They only rely on the facts of their present life stage. They stopped dreaming about what more there is in life. I tell you that when you've grown too old to dream, you hasten your end!

Let both facts and feelings create dreams for us. Dreams and visions are the stuff of life. They get us excited about the future and as a result about our present.