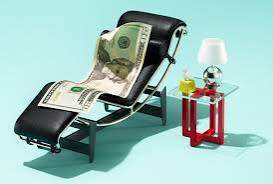 Stress over money is commonplace. It's a significant source of anxiety in the lives of a large majority of people around the world. This mental health problem clearly extends across socio-economic classes.

I got a glimpse inside some numbers on this. Recent studies show that almost 80% of families live in survival mode. That is, from pay check to pay check. Not to mention rising credit card debts.

In another recent survey, among the wealthy or "haves," I discovered that 71% of them still identify money as a significant source of stress in their lives. Surely, no one seems alone in this regard.

If you struggle with money-related stress and anxiety, remember that it's not about the amount you have. Not about shortage or excess of money in your hands. The problem is more than that.

I once knew a young woman from a poor province who relocated to the city after marriage. She's used to owning less and feeling happy and contented.

When she started a travel business that earned much money, something changed. Her "commercialization" somehow worked to stir discontent in her heart.

Eventually, her redefined happiness affected her marriage. She committed an affair with a rich engineer working in a Middle East country. Her own particular "mind over money" led to losing her moral compass as well.

After years of relentlessly pursuing more wealth and possessions and living in with another man, she got terribly sick. She died of cancer back to her province in her early 40s.

The stress of money then lies in how you think about it. A matter of mind over your money. You define what money means to you and that determines how you'll interact with it.

Significant psychological studies clearly show that money won't actually make you happy. Experience also evidences this. Money is not the greatest goal of life and work.

As soon as you stop perceiving this illusion, the sooner you can start seeing where true happiness lies. Think about it well. Discover the real.

Healing from financial stress is changing the way you think about money totally. Money, at its core, is just a tool. Be careful with how you think about, pursue, and use it.

"For the love of money is a root for all kinds of evil. Some people, eager for money, have wandered from the faith and pierced themselves with many griefs" (1 Timothy 6:10).