Death is Sure But it's Never the End

Willie was diagnosed with cancer. Just a few weeks after that, all his thoughts hit hard, resulting in sleepless nights and anxiety panic attacks.

Eventually, he developed thanatophobia. That's fear of dying or being dead. Then it worsened to necrophobia, which is fear of dead things or things associated with death, such as coffins.

Fear of death is normal. Rational, in the sense that it's inevitable. But phobia is irrational. It prevents you from effectively living life (making the most of time) without screaming in terror.

Instead of falling prey to death anxiety or fear as a mental disorder (even a curse), you can take steps to alleviate it. And with that, much better enjoy your life.

You can choose to move forward with faith. Value and enjoy life. Switch from anxiety and fear to excitement. Focus on things above the earthly or material. Do preparatory stuff. Be still and know God. 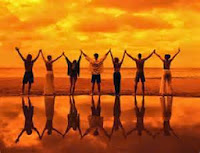 That's true of Billy Graham. One of the wisest men who ever lived, he is almost 100 now. Once interviewed by a journalist regarding his view of death, Billy said that he's prepared for it, anytime.

He said, " ... death is a reality common to us all, and for me as a Christian it isn't something to be feared, because I know what lies ahead for me beyond the grave."

For the wise man, death is sure. But it's never the end.

Jesus promises, "I am the resurrection and the life. He who believes in Me will never die" (John 11:25).

"For the wages of sin is death but the free gift of God is eternal life in Christ Jesus" (Romans 6:23)