The Use of Failure

It appears way too common that so many who experience mental disorders were raised in dysfunctional families.

The children of alcoholics, abusive parents, or broken homes grew from the pain of their families of origin to become failures.

Mostly it seems. But not all, of course.

A number of individuals who came from dysfunctional families turn out to be successes with the right use and transformation of “failure” in their lives.

Carl’s Dad was alcoholic, abusive, and unable to stay employed. The poverty in the family fueled Carl’s ambition to earn money to become one of the nation’s richest men.

In addition, Carl became a loving husband and father as well. His example earned him public recognition as a model to families.

It is not that you’ve to have a failure-prone parent or dysfunctional family to succeed or be better. It’s not the point that I’m trying to imply.

The point is that brokenness or troubled environment does not preclude any one to flourish. Failure and struggles can serve as fuel to become more resourceful adults.

Therapy takes the stand that early conflict, family tension, and exposures to failure need not destroy a person’s character and life.

You’ll be amazed how powerful a fuel failure is to your best life ever! 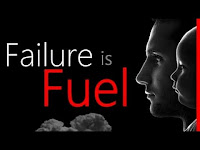 Secrets of Your Self
https://www.kobo.com/ph/en/ebook/secrets-of-your-self