Procrastination. The act of delaying or avoiding doing something.

It steals time. It steals reward, profit, or incentive. It steals personal development. A con artist in action.

It does the stealing with a host of cheap tricks: rationalization, excuses, void promises, embarrassment, laziness, guilt and shame. 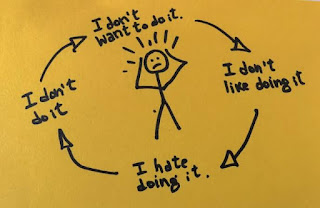 In Filipino culture, an equivalent word is “manana.”

In “manana” habit, a person loses motivation and neglects what’s essential or necessary to act on.

I’d met a medical doctor who said he has a “double life.” After being caught of his womanizing and pornography, his wife asked him to seek help.

He stepped into the therapy session. And blinked in disbelief.

The test tells him the truth - but his internal professional thief whispers a different interpretation.

After the session, his con artist tells him to not do it any longer. He postponed succeeding appointments. He made excuses to his wife. He dodged it. He ignored it.

The professional thief offers the perfect alibi. And back on the shelf goes his promise to rehab ... relapsing back to his “double life.”

Therein the grim thief wins another victory in sabotaging a person’s life.

To master procrastination is to master the self. It requires all the discipline you can muster to eject the thief from your system.

What do you say? Is procrastination a sign of mental illness?