As a psychotherapist, I’m acquainted with human suffering. Regularly. Week by week, it’s staple in my psychological diet that waits to be processed into good nutrition or digestion.

Typically, due to unresolved emotional trauma (detected or undetected), people experience unnecessary loss or waste of years in their life span.

According to a PTSD (post-traumatic stress disorder) research, 75% of people will experience a traumatic life event. And these events eventually cause overwhelming pain, even mental disorders.

It’s not all bad news though. Something good may also come out of the bad.

As author Jim Rendon put it, “Trauma can also be a powerful force for positive change.”

I’m reminded of a former OFW patient, Mike, who went into deep depression and alcoholism after his wife left him for another man and took all their two young children with her out of the country.

So traumatic was Mike’s response to the event that he had to be hospitalized a few times while working overseas. He almost drowned in his sorrow.

But it was not an endpoint for Mike. After a psychologist shared with him about God in his hospital bed, he grew eventually in his mental health and spirituality.

He developed much greater inner strength than he ever thought possible. Life had more meaning. And he found a godly woman, remarried, and had two kids later.

Today, Mike is a Christian Mental Health counselor and life coach practicing in one of the states in the U.S. He lives with his new wife and two growing kids near the office where he works.

“Trauma is a fact of life. It does not, however, have to be a life sentence,” Peter Levine rightly observes.

Scripture tells us that God can restore your lost years (Joel 2:25). And in Romans 8:28, it says “ ... all things work together for good for those who love God, to those who are called according to His purpose.” 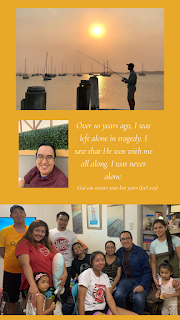