The study found out that people who did Walking exercise had 43% fewer bad mental health days compared to those who didn’t exercise at all.

The greatest mental health benefits were found among those who walked and exercised at least 45 minutes a time, 3 to 5 days a week.

This mental health boost occurred across a wide range of demographics, taking into account age, race, gender, and socioeconomic factors.

Walking has always been a part of my psychotherapy practice.

During earlier years onwards, I’d take opportunity to walk with my clients while having a session - either in the mall or in a hospital’s greenery park which I used to frequent.

I remember David, 22 then, who had a bad, violent relationship with his father. When he saw me, he was sinking into deep depression and could hardly function each day.

After a few visits and walks around the hospital’s golf area where I met David for talks, he began to loosen up. And, told me his long story, a base from which I was able to help him significantly over time.

It’s interesting for me to note that there appears to be a close link between my “therapy walks” with David and the progressive reduction of his bad mental health moods during our work together.

This coming new year, I’m envisioning to create a Walking for Mental Health community among my present and potential clients.

Hopefully, it can be of some contribution to a solution to what Ralph Waldo Emerson, a Nature walker himself, once wrote about:

“Few people know how to take a walk. The qualifications are endurance, plain clothes, old shoes, an eye for nature, good humor, vast curiosity, good, good silence, and nothing much.” 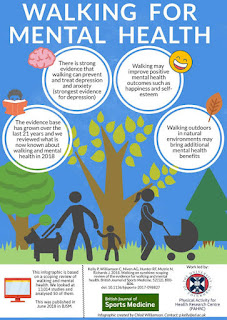