Psychological Development in the Second Half of Life

It’s dangerous to get your self worth in the temporary. Things like physical powers, occupational status, or fame disappears over time.

In “Psychological Development in the Second Half of Life,” author Robert Peck writes:

“Some people cling to physical powers, both as their chief ‘tool’ for coping with life, and as the most important element in ... their self-definition. Since physical powers inevitably decline, such people tend to grow increasingly depressed, bitter, or otherwise unhappy as they grow older.”

In the course of my therapy work with him (and his wife), Victor received a fatal diagnosis of brain cancer.

As a result, he’s unable to continue on as CEO of a multimillion company which he founded, as well as competitor in his favorite motorcycle events. It’s the same thing as sex, he’s no longer able as he used to.

It’s too hard an adjustment for Victor at 55. He frequently expressed feelings of uselessness. It’s as if he and his life didn’t matter any more.

As one elderly retiree put it, “Old age for me has been the recognition of what was left when all that I was was taken away from me.”

Everything here on earth is fleeting. In continual flux or change. Life is not open-ended. When illusions are worked through such as in therapy, you get back to what truly matters.

And that is becoming one’s self. Your true, essential self - reduced to just what one is: a piece of common clay. 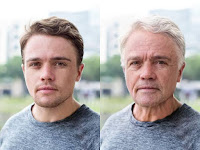 “In youth, a man fancies that there is a prodigious amount of happiness and pleasure to be had in the world, only that it is difficult to come by it; whereas, when he becomes old, he knows that there is nothing of the kind; he makes his mind completely at ease in the matter.”