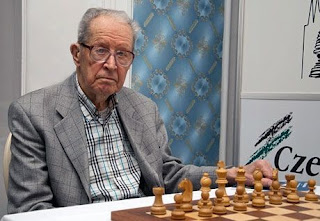 “I have come to the personal conclusion that while all artists are not chess players, all chess players are artists.”
— Marcel DuChamp

He is Russian, 98 years old. Yuri Averbakh, currently the oldest chess grandmaster in the world.

He enjoys his life, being a part of the world chess community. He writes books, mentors young aspiring players, and still plays well in seniors events.

According to the rules of neuroscience, aging tends to have effects on one’s playing ability. The elderly’s synapses in the brain are progressively being pruned away.

So, the needed amounts of volume are somewhat lost over time. Of course, there are variations, depending on an individual’s unique make-up.

But even if the brain of the elderly tends to slow down, chess does have psychological, social or emotional benefits for them.

Alan, a 60-year-old patient, retired early after decades of corporate work. He lost his wife years back and has adult children already with their own families and lives to live.

He goes back to his old art - chess - where he used to be a champion during his teen age.

At a nearby chess club, he found fellow retirees going back to the game after many years away. He enjoyed the coffee and banter with them, along with the younger ones. while playing again.

His nights are now filled with face to face or online chess instead of pornography/masturbation. He prepares and studies seriously to compete in local, national, and even international chess competitions.

Alan has discovered the right “replacement” therapy for him and his mental health. His art saves the integrity and wholeness of the remaining years of his life.